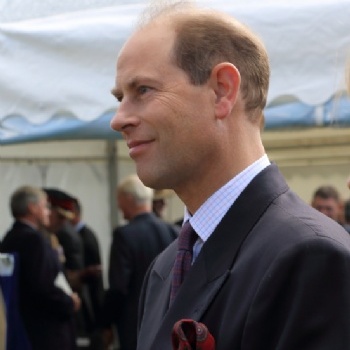 HRH The Earl of Wessex KG GCVO visited Gordon’s School on Friday 10th October 2014. The purpose of the visit was to unveil a plaque which marked the recent restoration of the statue of Victorian Hero, General Charles Gordon astride a camel.

Gordon’s School is a State Boarding School for girls and boys aged 11-18 years. Founded in 1885 on the instruction of Queen Victoria as the National Memorial to General Gordon and was originally a Gordon’s Boys’ Home. It changed to Gordon’s Boys’ School in 1942. Girls were admitted in 1990. There are now 745 pupils of whom 210 are residential boarders.

The statue was given to the school by the Government in 1959 when it was shipped from Khartoum. Since then weather had eroded the Portland stone plinth and the bronze statue, causing degradation of the bronze, discolouring and subsidence; tassels were missing from the Camel’s saddle as well as the reins.

Once further analysis was carried out, it was evident that the camel’s front right leg displayed significant deterioration. It was removed by Escar UK Bronze and sent to Canada to undergo a pioneering process supported by English Heritage called ‘Cold Spraying’. This was successfully carried out enabling the original leg to be repaired, strengthened and re-attached, using traditional welding and fettling techniques.

In 2013 the Camel Campaign Restoration Appeal was launched by The Gordon Foundation, a separate charity that specifically supports Gordon’s School. Within 9 months the target sum of £27,000 was raised through donations from organisations and individuals.

During HRH The Earl of Wessex’s visit he unveiled a plaque to commemorate the restoration of the statue and then met students representing various areas of the school’s co-curricular programme including Chinese Music and Mandarin classes, the Duke of Edinburgh Award Scheme, Combined Cadet Force, music, sports and drama as well as members of the school’s Charity and Eco-Committees.

At the end of his visit HRH The Earl of Wessex inspected the Parade and the school’s well-known Pipes & Drums.