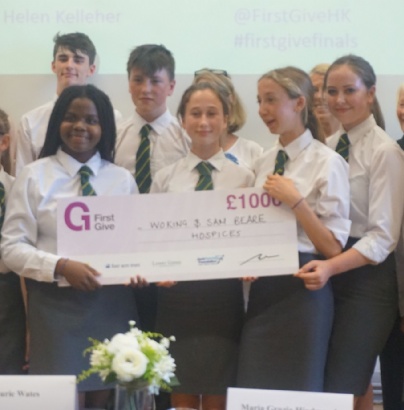 They were silent, they collected secondhand clothes and they increased awareness of their charity. In all, Class 4 of Y9 PSHE raised £857 for their charity Woking and Sam Beare Hospices through sponsorship and donations. Last night they were voted winners of the £1,000 cheque from First Give which will be added to the money already given to the charity they care so deeply about. Seven judges listened to presentations from four classes, who gave impassioned information about their chosen charities – Alzheimer’s Society; Stepping Stones; Samson Centre for MS and Woking and Sam Beare Hospices. The team of Harriet Duffin, Tilly Phillips, Livvy Garner and Nathan Butler emerged winners and were presented with their £1,000 cheque for their charity.