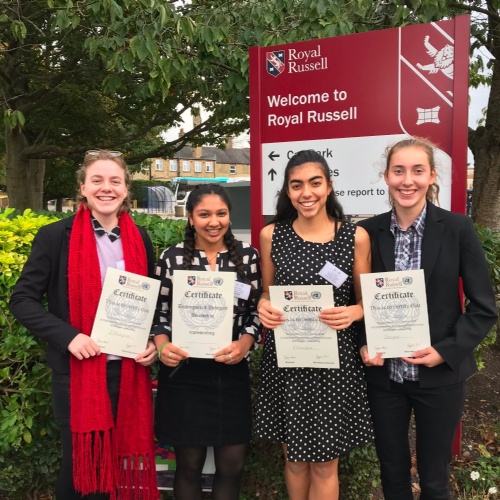 Congratulations to our MUN team on their success at the MUN Conference on 14th-17th October.

On Saturday 14th October a small, but perfectly formed, team of MUN-ers attended the U.K.’s most reputable MUN conference. Joined by 500 students, many of whom had travelled 1000s of miles to attend, Dina Khan, Grace Keyes, Tia Jasani and Ella Litjens represented Gordon’s at Royal Russell School’s 36th Anniversary Conference. From the ‘question of child soldiers’ to the ‘question on the implementation of driverless cars’, the Gordon’s team worked tirelessly over four days to represent the views of their assigned country: Ethiopia.

Alongside the long days of heated debate, the MUN team proved, once again, that they definitely subscribe to the ‘work hard, play harder’ maxim and really threw themselves into the social aspects of the conference, which included discos, film screenings and even an MUN’s Got Talent event!

Despite being the youngest delegates at the conference, the Gordon's team dominated their committee rooms. Particular congratulations must go to Dina Khan for winning the most prestigious ‘Outstanding Delegate' Award.

With Croydon High coming up in a few weeks, there really is no stopping us! Remember you can follow all the activity from the MUN team @gordons_enrichment