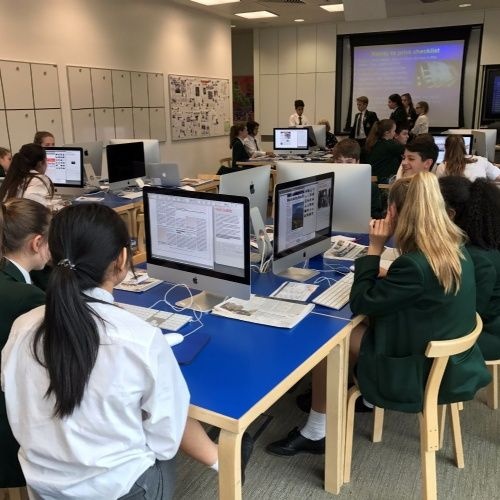 Students in Years 9 and 10 visited ‘The Guardian Newspaper’ on 29 September 2017 for an English Department trip.

We visited the newspaper’s Head Office by King’s Cross Station, where students saw some original features from the 1821 Manchester Guardian building, now part of their London building.

Students were told that ultimately journalists deal with the ‘5 Ws’ in their stories; they must answer the ‘Who? What? When? Where? Why?’ questions for their readers and audiences. They were told about the conventions or features of newspaper articles like summing up the whole story in the opening paragraph and the way that newspaper reporting contains a high frequency of ‘facts’ and quotations.

Gripping stories of the day included major international stories like the Rohingya refugee crisis in Myanmar and a volcanic eruption in Bali, with domestic news including a Conservative Party poll of members about preferences for the next Party Leader and a science story about hygienic handwashing.

Please be aware that a display of the students’ front pages from this visit to The Guardian can be seen at the Sunday Parade on 15 October.