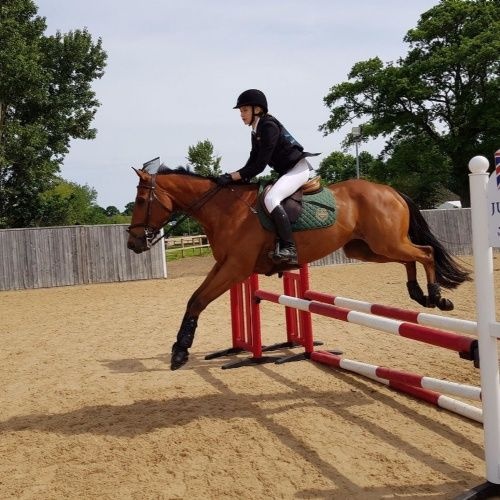 The Gordon's Equestrian team continue their reign of success this new academic year.

The equestrian team have had a weekend like no other!

The first time the Gordon's Equestrian team have entered a Dressage team into a competition and we were trilled to qualify for Nationals!

Chloe Hill, Gigi Gough and Molly Barnard made up the team and got a total of 200% (out of 300%), with Cranleigh just topping the Gordon's team with 208%. Particular congratulations go to Gigi Gough for this event, Gigi has never completed a Prelim test before so to qualify as part of the team is exceptional.

Congratulations also go to Chloe Hill who came a very close 2nd in the Novice with 70%, with first place receiving 70.38%. Chloe continued her success as she came second in the Prelim test with an unbelievable 82.7%! Chloe has only been on the team for a few weeks and has already qualified in the Prelim, the Novice and as part of the dressage team.

Whilst we were there, Molly entered the unaffiliated show jumping competition that was running at the same venue and won the 80cm class!

Holly Norris achieved double clear in the 80cm class. There were 129 riders in the class and she came in the top 25% and has only had her horse a few weeks, so a fantastic achievement by Holly.

Gigi Gough was out for the second day in a row and went double clear in both the 60cm and 70cm grassroots classes and unbelievably qualified for the grassroots regional championships in the 70cm class by coming 5th out of just under 50 riders. A huge congratulations to Gigi for this.

Gigi is only in Year 8 but has had a very successful year so far. As well as all the above, she has also attended the Horse of the Year show on two ponies (one of whom she owns, the other she has been asked to ride); the biggest show in the country, been awarded the La Liga award, attended the Heritage show and the NSEA Nationals, and has been featured in the Horse and Hound magazine, so a huge congratulations to Gigi.

Congratulations to all the Equestrian Team and we wish you continued success - keep up the good work!