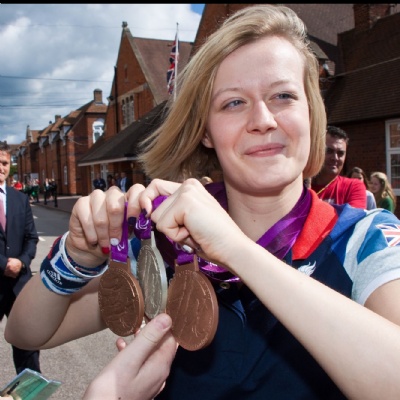 Gordon’s School would like to issue a huge congratulations to one of our Gordonians, Hannah Russell, for her recent MBE honour (Member of the Order of the British Empire). Hannah was awarded her MBE in the New Year Honours list 2016 for her services to swimming.

Scouted in 2010 by the Playground to Podium initiative, a British system of spotting sporting talent in young people with a disability, Hannah has since gone from strength to strength, making rapid progress in the S12 classification of visual impairment.

The 2012 British Gas Swimming Championships brought a series of firsts for Hannah as she won her first British title in the MC 100m Backstroke, set her first European record and booked a place at her first Paralympic Games, London 2012, in the process. Less than a month later, she broke two world short course records (S12 100m Back, S12 400m Free) before confirming her five Paralympic qualification times at the second Trials.

Hannah finished her first Paralympic games with 2 medals, a silver for 400m freestyle S12 and a bronze for 100m butterfly S12. These games were her first but certainly not her last.

Hannah also swam for GB in the recent 2016 Rio Paralympics where she proved her consistent progression, winning three medals, including two golds for 100m backstroke S12 and 50m freestyle S12, and achieving a World Record time in the 100m backstroke.

We are immensely proud of Hannah and her fantastic achievements, she was a hardworking student, keen to maintain good grades whilst training and swimming. Hannah truly reflects our five character values: courtesy, integrity, diligence, enthusiasm and resilience.

Hannah came and visited Gordon’s recently and gave an inspiring talk to the students on how to cope with setbacks and achieve their goals.