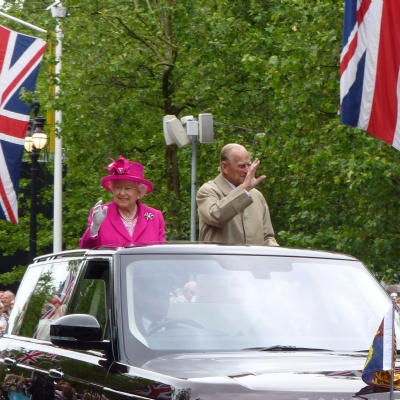 Since Queen Victoria took the lead in establishing Gordon’s School as a fitting National Memorial to General Gordon after his death in 1885, HM The Queen has remained the school’s long-standing Patron and last visited the school alongside HRH Prince Philip during the summer of 1985.

Next came the biggest street party of the year; The Patron’s Lunch on Sunday 12 June. Together with a handful of staff members and parents, students Emily Hickin (Y13), Henry Watts (Y7), Adam Kruger (Y10) and Laura Fothergill (Y7) travelled to London to attend the event alongside some 10,000 other guests, all of whom were from other organisations and charities which The Queen supports as Patron.

Broadcasted live on the BBC, The Patron’s Lunch took place on The Mall outside Buckingham Palace and, in true British style, the rain showers throughout the morning did not dampen spirits! The rain ceased in perfect timing as The Royal Family arrived on The Mall to greet guests.

The weekend was a great success and a fantastic opportunity for students to be involved in such a unique and special occasion. On behalf of all at Gordon’s School we wish our Patron, Her Majesty The Queen, a very Happy 90th Birthday.

Photographs from The Queen’s Birthday Parade are available to view via www.gordons.surrey.sch.uk under About the School – Latest Photos.