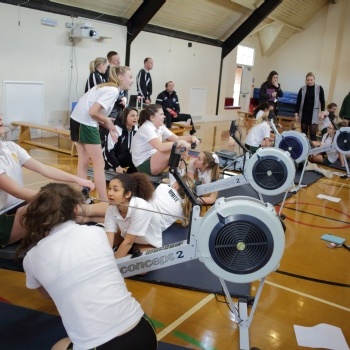 Throughout the week commencing Monday 22 February, the Inter-House Indoor Rowing took place in the gymnasium

Throughout the week commencing Monday 22 February, the Inter-House Indoor Rowing took place in the gymnasium. Having had recent great success in winning the Surrey Schools rowing, it was decided to change our competition format to bring us in line with the Counties.
In the past, we have always raced as relays over a set distance with the first team to reach the distance deemed as winners.
However this year each year group in each house, had to provide four rowers to cover as much distance as possible in a set time with each rower rowing for an equal amount of time.
Another big change for this year was the use of the main screen displaying the race for all to see. This was without a doubt a massive success, ensuring that the race became a great event for spectators as well as the competitors. For this I need to offer a big thank you to Major Ian Phillips and WO1 Stu Jackman of the Royal Army Physical Training Corps for loaning and setting up the kit for us.
The races, as always were met with massive enthusiasm from all competitors, producing some very close hard fought races.
Victories were spread quite evenly throughout, with 8 of the 9 Houses taking at least one trophy.
The final event of the week was the staff against the Year 11/6th form team. Teams were made up of 2 male and 2 female competitors. This proved to be another close competition with the staff just stealing over the pupils. However it has to be pointed out that the pupils had all raced for their respective Houses just minutes before.
Congratulations to overall House winners: Khartoum and Kensington!
Please click here to view full Inter-House results.
Well done to all who took part and a big thank you for the support.
Steve Monk