Queens of the Greens 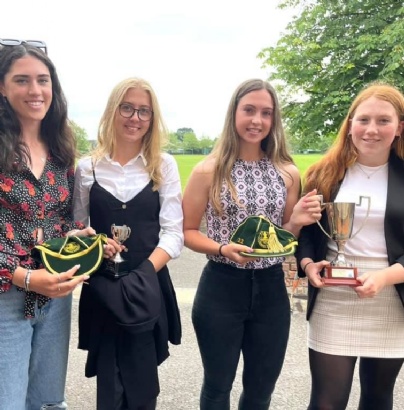 In two years, they have lost just one match out of 24 and have raided the country and county’s trophy cabinets, becoming the most successful team in the history of sport at Gordon’s. This year’s winners of the Team of the Year at the Sports Awards were the Gordon’s Golfers. Golfer Sarah Mardani, who helped the team to victory at the ISGA Championships and is heading off to America next year on a golf scholarship, won Sportswoman of the Year and Rugby First XV Captain Chris Johnson became Sportsman of the Year. In paying tribute to the sportsmen and women at Gordon's,  Director of Sport Jamie Harrison said: "To the Year 11s and 12s here, the challenge is to leave the sport in a better place at the end of Year 13. To our leavers, you will be forever green. Remember your roots and I hope you look back on your sporting years at Gordon's with pride and satisfaction knowing you did all you could for the school." Congratulations all those who were presented with Honours Caps and Colours and all the teams who have made this year such a phenomenal one for sport at Gordon’s.