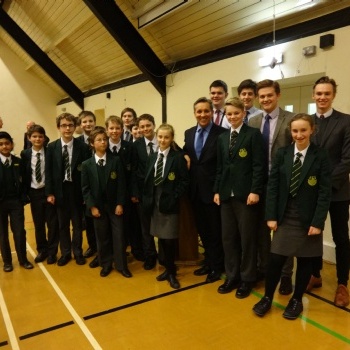 Approximately 130 parents and students attended the evening talk in the Gym to hear about Mr King’s journey through higher education, his ups and downs working for retail giants including Mars, Pepsi, Asda, Haagen-Dazs and how he transformed Sainsbury’s into the hugely successful business that we see today.

Mr King emphasised to students that in order to achieve success in business, you should not to take it too seriously, have fun and overall, have passion for what you do. His message to students was to "Do the things that motivate you and that you enjoy, because you'll do them better.”

Our thanks go to Justin King for giving such an interesting talk and to all who attended the Insight Talk. Keep an eye out for the next speaker (still to be announced) for the Summer Term.

“Thank You for arranging yesterday's Insight Talk with Justin King. I found the talk very inspiring and enjoyable and to have an hour of Justin King's time is quite something special.”

“Very informative and interesting to all.”

Please click the link below to read an exclusive article by the International Business Times featuring Gordon’s School: