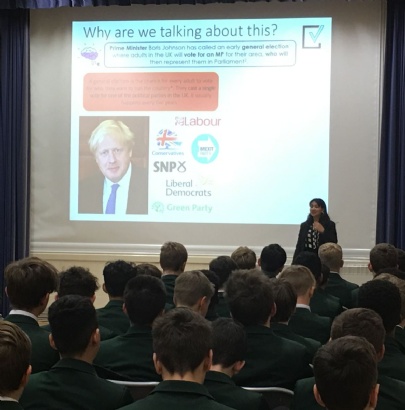 Sixth Formers on the campaign trail took over this morning’s Assembly in this, their final week of trying to win votes before our G-Election on Thursday. Each of the five political parties with candidates in Surrey Heath are being represented by a student. Today, as students across the year groups starting receiving their G-Election polling cards, party candidates explained the voting process and an outline of each of their party’s policies to their younger peers. Over the past few weeks, candidates representing Surrey Heath’s political parties of Green; Labour; Liberal Democrat and Conservative have been visiting for talks and question and answer sessions.