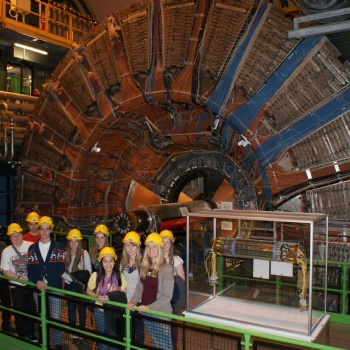 Having met at school at the incredibly early time of 4.45am we collected our brown paper lunch bags and headed off.

Having met at school at the incredibly early time of 4.45am we collected our brown paper lunch bags and headed off. When we arrived at the airport we finally found a car park high enough to fit the school mini-buses.

After a pleasant flight we arrived in Switzerland before period one had even started.

We spent the morning exploring Geneva in small groups, looking for Swiss chocolate shops, finding a nice spot by the lake and people watching from Starbucks.

In the afternoon we caught the tram to The European Organisation for Nuclear Research (CERN). On arrival we looked round the gift shop, and then we attended a presentation given by French physicist working at CERN where he explained how the collider worked and some of their experimental findings.

After the talk we travelled via coach to visit the LHCB experimental particle detector on the 27km underground collider. We split into smaller groups and were shown around by physicists who were working at the facility. Each group were squashed into a cosy lift to reach the collider, which was 100m below the ground (but still above sea level).

It was very exciting to see such a prestigious scientific research facility and to be shown around by physicists who are currently working there.

We returned to Geneva and had a leisurely dinner before briskly walking to the train station. To our relief we caught our train and made it to the airport in plenty of time.

After buying plenty of chocolate in duty free, we caught the final Geneva to Heathrow flight of the day. To our surprise we shared the plane with the politician, John Prescott.